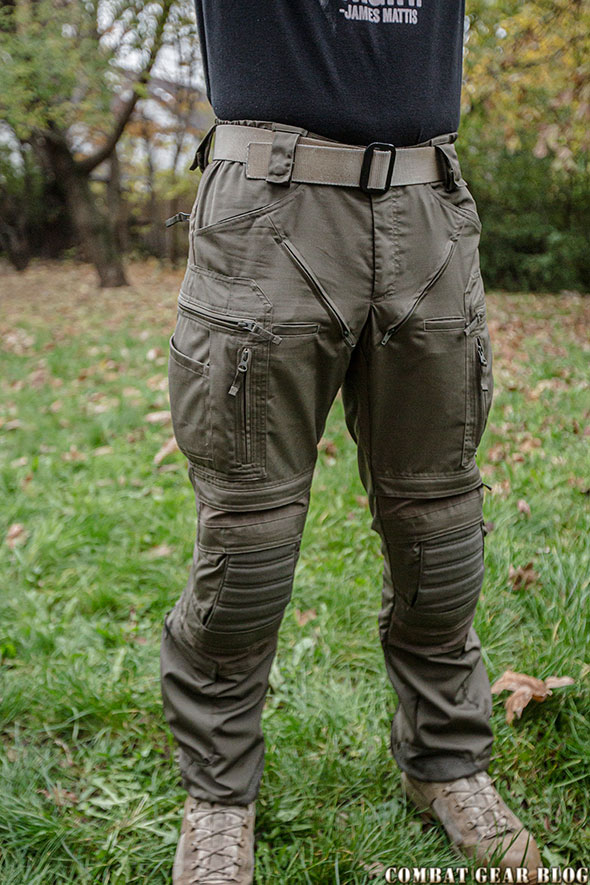 When Crye Industries came up with the G series Combat Pants, they set an example and ever since then half of the world copies this series or creates new ones based on it. Good examples of this are the Chinese and Russian manufacturers. 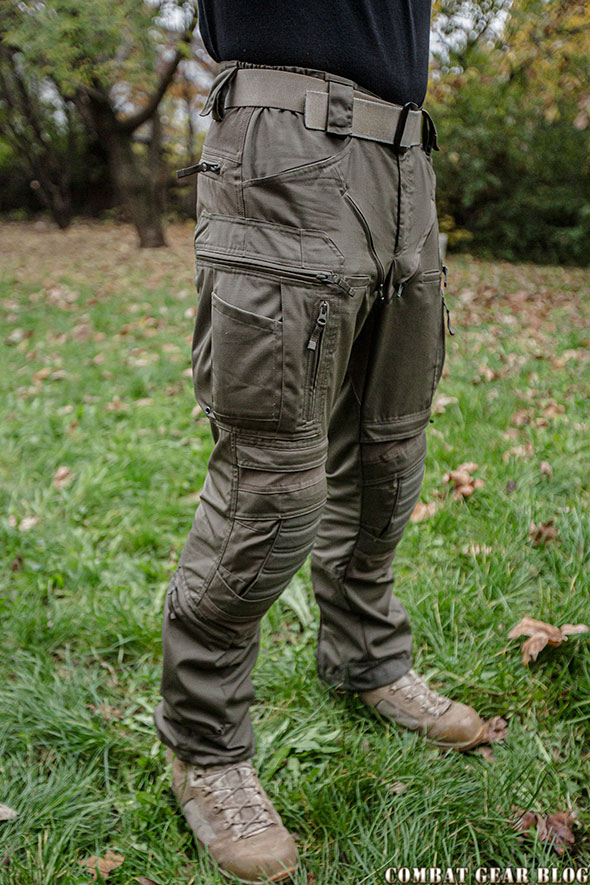 Beside this, tactical and combat pants swarmed the markets, and a lot of manufacturers created their own version of combat pants, and one can easily find Italian, German, English or Slovenian examples. 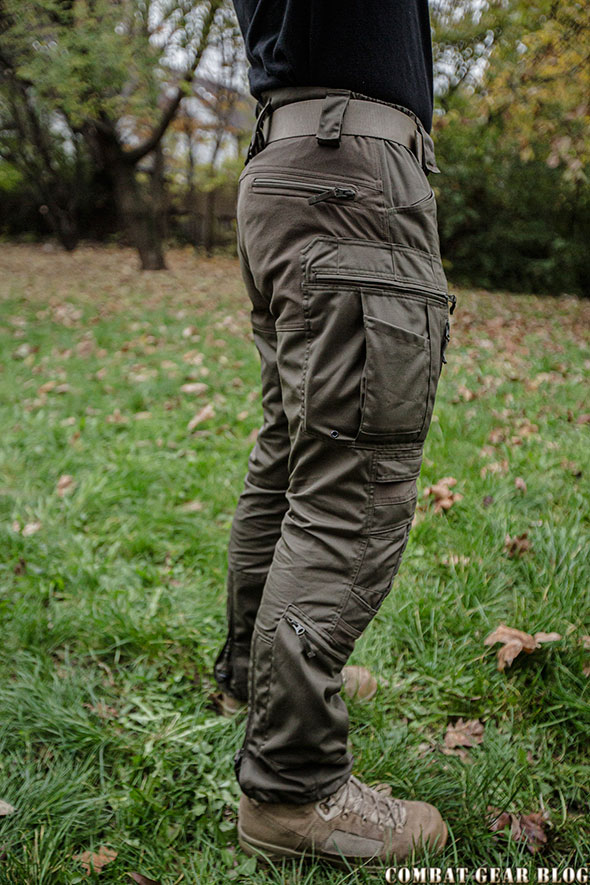 Though they might both look like a pair of pants with many pouches at first sight, the main difference between tactical and combat pants is that combat pants are more robust and usually have built in knee protection, among other features. 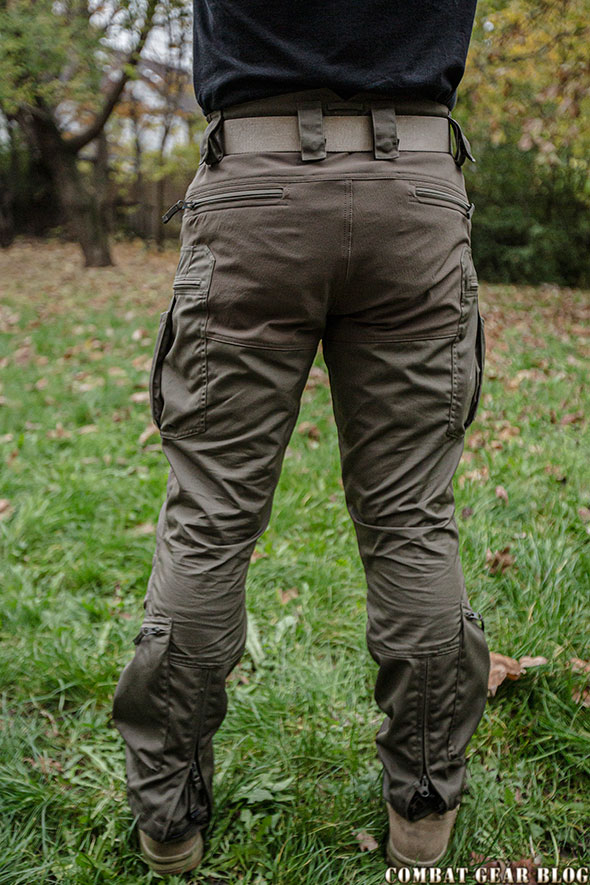 There is a basic version of the Striker combat pants, while the HT (High Temperature) is designed for hot weather, with a built-in passive airflow system. The newest Striker version is a little bit different with the removal of the elastic and zipped pant leg. 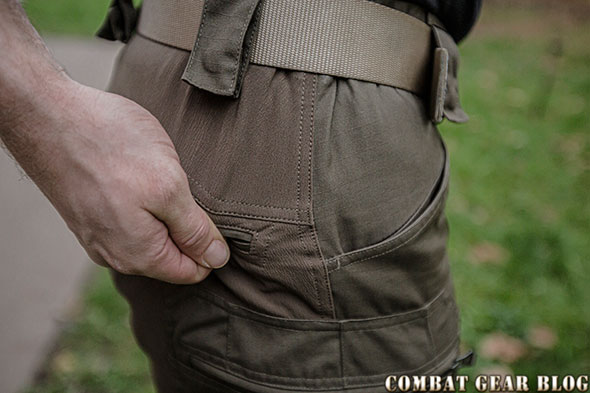 The back side of the trousers, from the line of the waist to the lower part of the bottom is made of the swiss Schoeller dynamic Ltd.’s elastic material. As a result you can't really feel a difference when compared to everyday pants, but it does not slip down with movement. 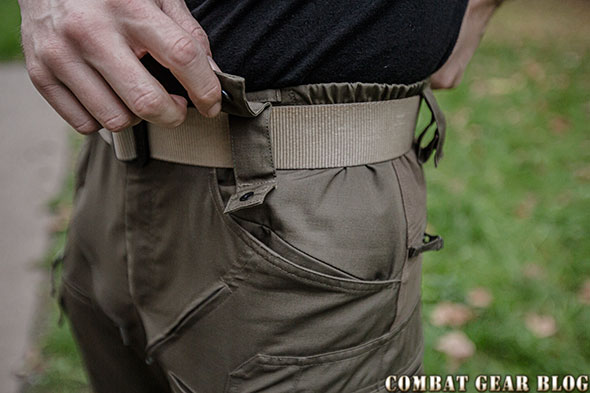 The belt loops are doubled, and the external ones are buttoned, making it easier to attach a warbelt or the internal part of it. The waist part of the trousers got an added elastic band. 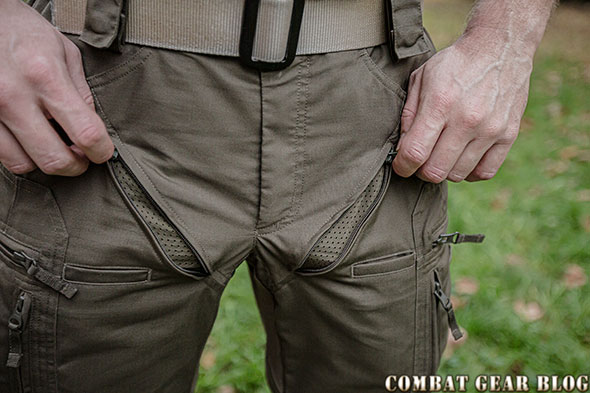 The HT version is easily identified with the two angular ventilating zippers. Next to the zippers there are two open top pouches for knives and torches. 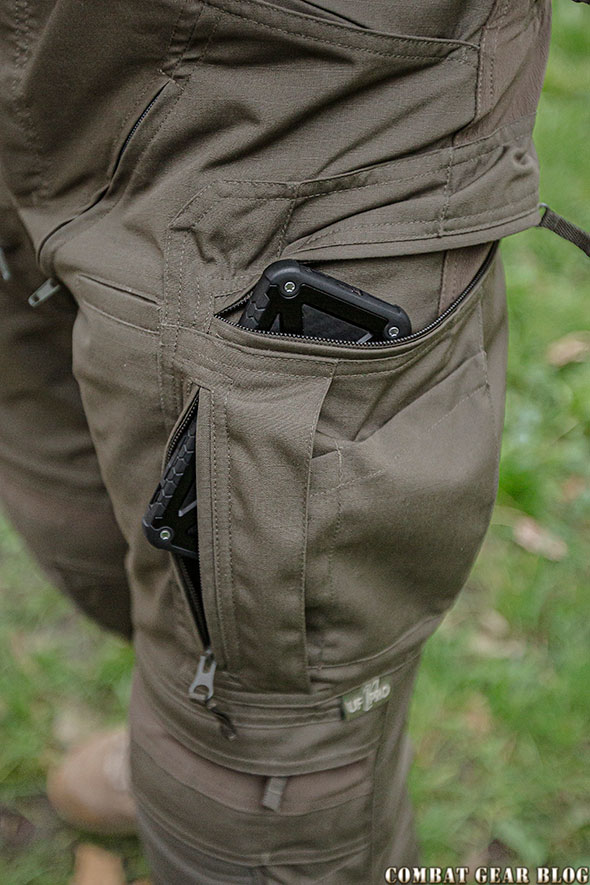 The two zipped side pockets are really practical. Reaching things is made easy, thanks to the horizontal and vertical zips, with grabbing also an ease even in a sitting or lying position. 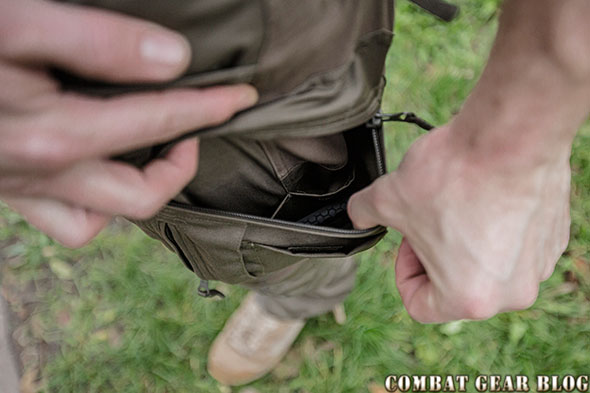 Inside of the pockets there are two separate open compartments. On my part I only put rubber gloves in it and the rest of my stuff I just throw in the pocket. 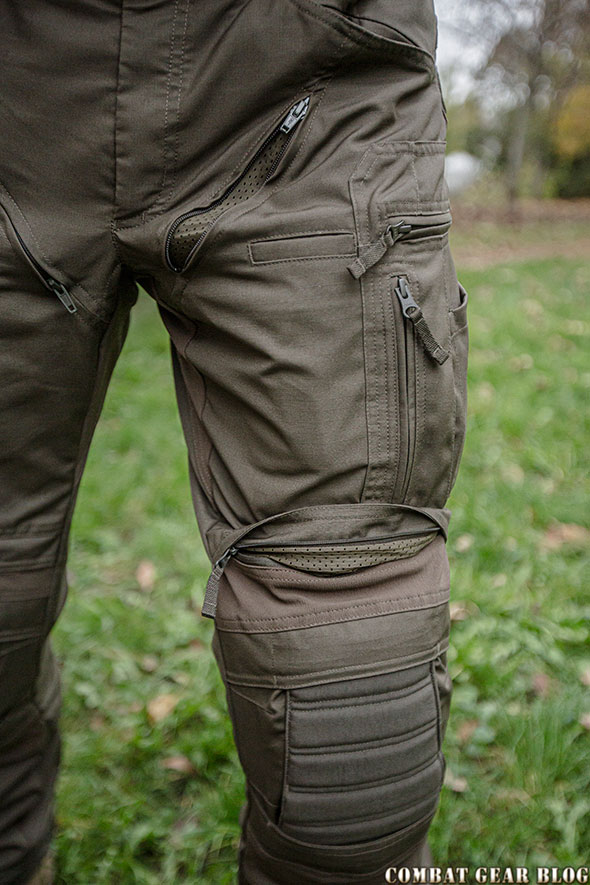 There are four built-in airflow ventilation holes, with zippers. The top ones are two sidelong zippers, the lower ones are located below the knee pad, sharing the same zipper with it. 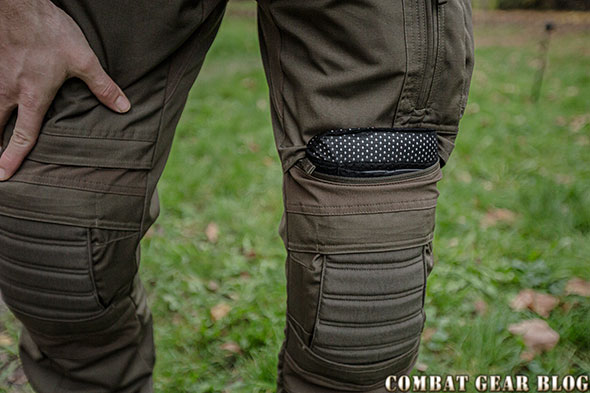 In the past weeks the temperature was around 10 celsius degree, I had no real opportunity to test this passive system. However I found it disturbing that the lower part of it shares the same zipper with the knee protection, because I had a bad feeling that the pads might accidentally come out of it.

The complete knee protection stands together from three parts, of which one comes with the pants and the rest sold separately. The outer layer is made of cordura and is lightly padded. 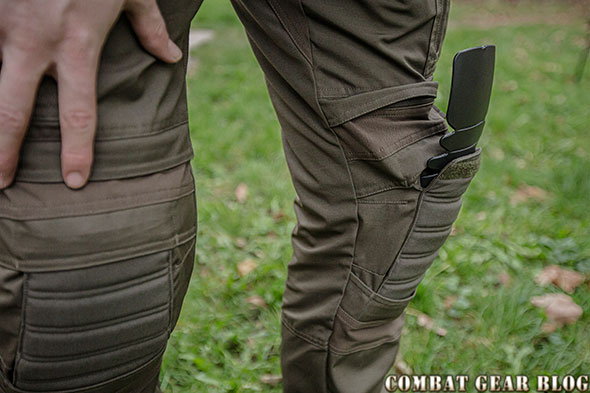 Behind this padded layer the solid black pads can be added. This one is a harder, but still flexible plate, one that can protect the knees against sharper objects. 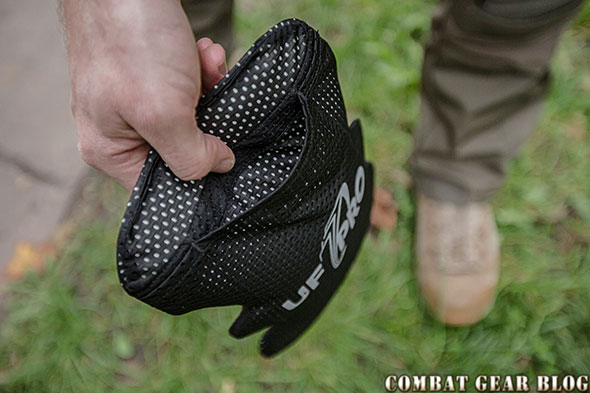 The third one is the largest one, it is situated above and below the knees. It is well padded and this is the shock absorbing layer. While the pants come with pockets behind the cordura knee pads for the solid pads, there are also small open compartments for them outside the shock absorbing pads, so that they can just as well be put in here. 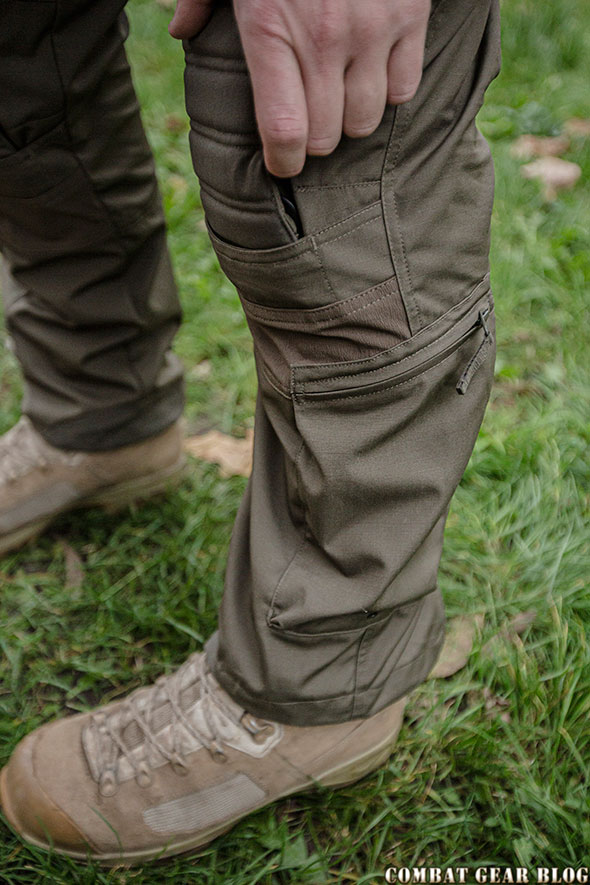 The lower leg pocket might be the first of its kind, not sticking out of the trousers outline, it is not disturbing at all. During the years I’ve never ever used such a pocket, so in my case this is the best design. 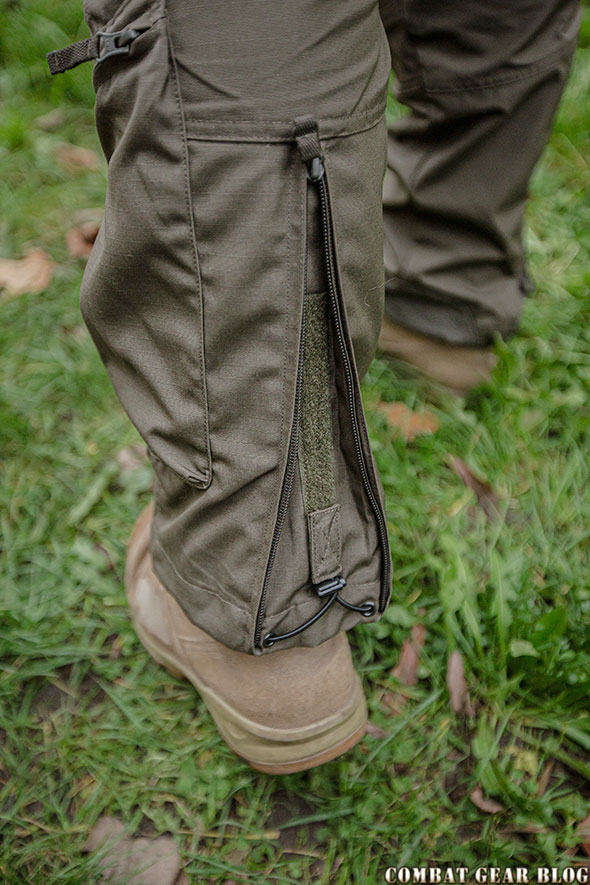 The trouser leg can be pulled together by shock cord, and the rest can be secured on a Velcro at the back side of the trouser. Thanks to the zips, you can easily loosen it. 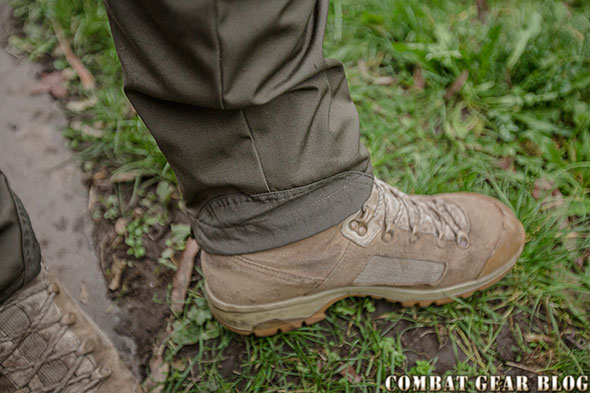 On the inside, at the bottom of the legs, there are extra layers like in most worker pants. 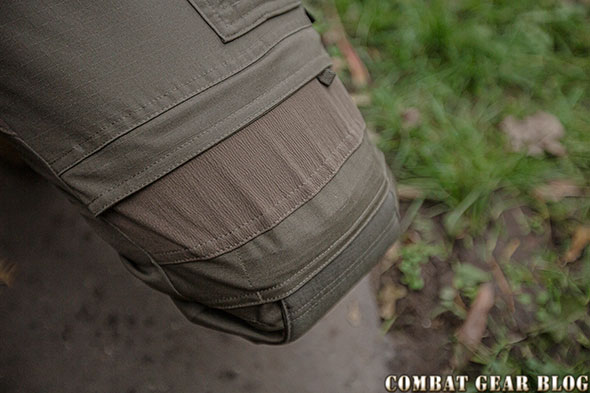 Extra credit goes for the Striker, against the Crye G1 for the elastic layer above and below the knee protection, which is thicker, and just two and three fingers wide at the bottom and top. To put this in context, in the G1 combat pants these layers are wider and thinner, so all in all more vulnerable.

Another accessory is the windstopper lining, that is antistatic, breathable and it's not going to stick to your skin if you get sweated. I felt it comfortable in the past weeks, and it is also very practical that you can easily zip it in the trousers, compared to other linings. 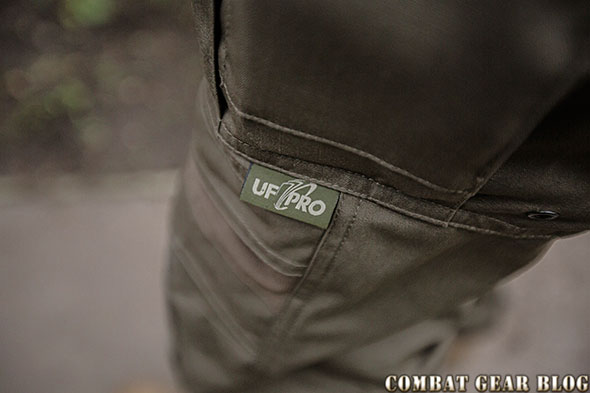 This tight feeling went away with wear occasionally, however I felt the Crye pants much lighter, yet vulnerable, and the Striker HT is still rougher. 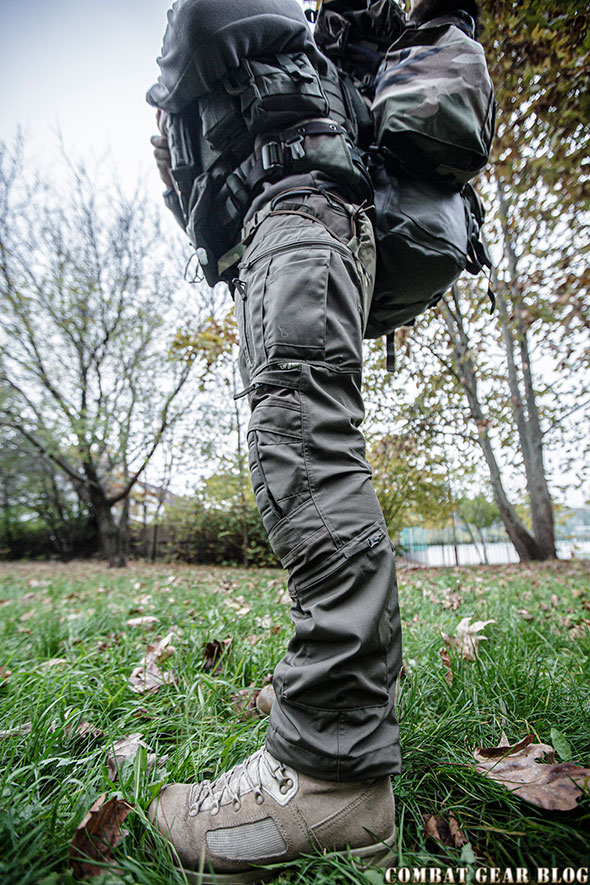 All in all I think the Striker is tough enough, I like the pockets, the side pocket is very practical. In my opinion the lightest elastic parts of the pants are not that vulnerable. 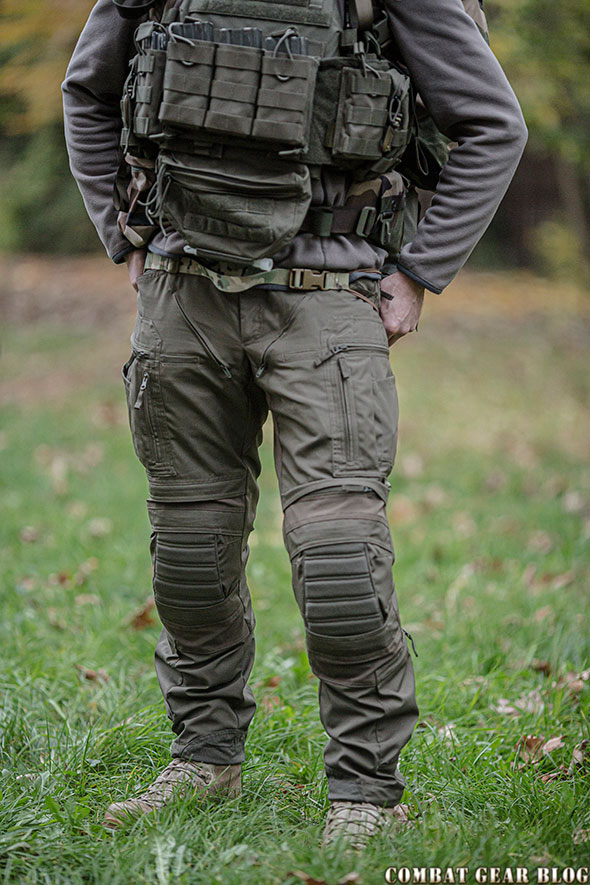 Compared to the Crye, the pockets and knee protection are better, there are less thin vulnerable parts in it and those are better protected, and the materials used feels tougher.

However the Crye G1/G3 series got better ergonomy and are lighter (~780 g without kneepads while the HT is around 1,5 kg with kneepads). There are also no big differences between the prices. Only in one case, if you buy all the accessories for the Striker, because it costs more than half of a new trousers.

All in all, i enjoyed the protection provided by the tougher matterial, the cargo capacity and the reason that i can put away all my things, and the knee protection that can be set according to my activities. I'm pretty sure that the Striker HT will hold its full value even after spent a couple of years together.

The pants for the test provided by UF PRO, thanks for it!

For more informations about Striker HT and the rest of UF PRO's products please visit this site.

Thanks K.K for helping with the translation!